Gordon Lynn is the most recent artist to try and accurately recreate how the streets of Inverness once looked. Others over the years who have created artwork from archival sources, or recorded the local townscape before buildings were lost forever, include
William Glashan whose exquisite work is now held in the Inverness Museum and Art Gallery, and Pierre Delavault, whose colourful images were painted over 100 years ago.

PIERRE DELAVAULT was born in Paris in 1859, but came to Inverness as the Art Master at Inverness Royal Academy in 1890. A book published in 1903 featuring his watercolour paintings of Inverness scenes is an important source of information on buildings which have since disappeared.

Delavault received his art training in Paris and as a student was accomplished enough to have his work accepted as an exhibitor in the Paris Salon. He came to Scotland in 1888, and first took up residence in Aberdeen where he became a teacher in a private school. After the death of the incumbent, Delavault accepted the post of Art Master at the Inverness Royal Academy in 1890. At the time he also held the position of art teacher in the private Raining’s School, until that institution was taken over by the School Board.

After coming to Inverness, he became a naturalised British subject and later married a Miss Vincent of Hingham, Norfolk, the sister-in-law of Clifford Smith, the Classics teacher at the Academy. Delavault had become a Freemason before leaving France and on coming to Inverness was affiliated with St. John’s Lodge, in which he afterwards held office. He was also a member of the Royal Arch Chapter.

Delavault was well liked by his fellow teachers and pupils in the Academy. He did excellent work there and on the annual prize day, the exhibition of paintings and sketches by his pupils were admired by all who visited the school. In later years his sphere of operations were considerably extended when he taught large classes of teachers in drawing and French phonetics. He also designed the cover of the school magazine, The Academical.

He fully identified himself with the teaching profession and joined the Educational Institute of Scotland where his artistic skill was displayed in the renovation of old and damaged pictures belonging to the Town Council of Inverness, in the execution of portraits of Inverness’s leading citizens, and in the interesting series of coloured paintings of Old Inverness, which he prepared for a book published in 1903 by The Inverness Courier. 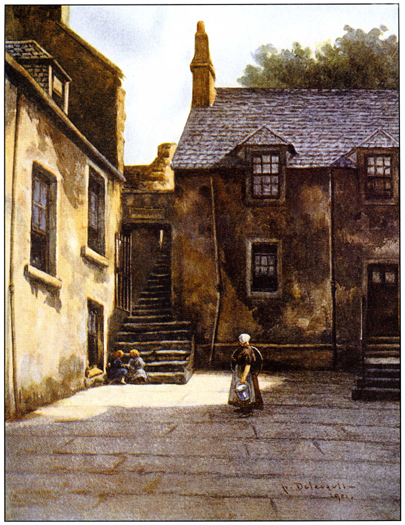 It was these works which made him one of the best known and widely admired of all those who came to the Highland capital and made it their home. The coloured prints found their way into the homes of many Invernessians over the years, some of which were reprinted in book form in the late 1960s, and as a series of prints and calendars in the 1980s and 1990s.

Pierre Delavault died aged 48 on the morning of 10th January 1907 in his home at Braehead in Old Edinburgh Road. He had been taken ill during the autumn of 1906 with a heart condition which, despite medical attention and nursing, proved fatal. He was survived by his wife and child, and his parents who were still living in Paris.

This article originally appeared in the autumn 2013 issue of The North Magazine.

One thought on “Pierre Delavault: Visions of Inverness”